Objectives: To make conjectures about the sides, perimeters, and areas of one triangle
and the triangle that is constructed from the midpoints of the sides of the original triangle.

Previous knowledge base: Students have prior knowledge of triangles, length,
midpoint, perimeter, and area. Students also have some experience with the Geometer’s
Sketchpad.

Tell the student that we are going to work with Geometer’s Sketchpad today to make
important discoveries regarding triangles. Ask them if they recall how to find the
midpoint of a line. The midpoint is the actual “middle point” of a line such that the
length from the midpoint to each endpoint is the same. The formula to find the midpoint

(base)(height). We will not be
computing these formulas by hand today, we will let Geometer’s Sketchpad compute
them for us.

Open up Geometer’s Sketchpad. While performing the following procedures, tell
your students what you are doing explicitly so that they can follow along. Choose the
point (it looks like a dot on the left side of the screen). Make three points on the
screen. Now choose the arrow and select all three points by holding down SHIFT and
clicking on each point. Now choose SEGMENT from the CONSTRUCT menu. We
have just constructed a triangle. Ask if there are any questions.

Now, using the arrow again, select the three sides of the triangle we have constructed.
From the CONSTRUCT menu again, choose POINT AT MIDPOINT. A point
appears at the midpoint of each segment. Now with the SHIFT key held down, select
our three midpoints. Then, choose SEGMENT from the CONSTRUCT menu. We
have just constructed a smaller triangle inside our original triangle using the
midpoints of the first triangle as the vertices of the second. Ask if there are any
questions and quickly walk around the room to make sure everyone has the right
picture.

• Analyzing the Measures of the Angles and Sides (15 minutes)

the length of the each side of the larger triangle is twice the length of the side of the
smaller triangle that is opposite it (and also parallel to it). So in this example, AC is
twice as long as EF, AB is twice DF, and CB is twice DE. Now let’s look at the
measures of the angles in each triangle. To measure the angle, select the three points
that define the angle in order. For example, if I wanted to measure angle A in the
picture above, I would select point C, then A, then B (all while holding the SHIFT
button as before). Then choose ANGLE from the MEASURE menu. Another way to
get this same angle would be to choose points D, A, and E since ∠ CAB is equal to
∠ DAE. Repeat this procedure for the angles at the vertices of each triangle. There
should be a total of 6 angle measures. For review, ask the students what the sum of
the three angles in each triangle should be (180°). Once the students have calculated
the measures of all the angles, ask if they notice anything of interest about the angles.
The students should notice that the opposite angles are equal. In our example above,

• Analyzing the Perimeters and Areas of the Triangles (15 minutes)

Now we will look at the perimeter and area of each of our triangles. Select the three
vertices of the larger triangle. Then choose POLYGON INTERIOR from the
CONSTRUCT menu. This should color the interior of the triangle. Now choose
PERIMETER and AREA (one at a time) from the MEASURE menu. Repeat for the
smaller triangle. We will now compare the areas and perimeters of the two triangles.
It may be difficult to understand what is happening here since the students will only
have two measurements to compare for the perimeter and two to compare for the
area. Make a table on the board and ask students to give you their information to fill
the chart. With a lot of data from the class, the students should be able to see the
relationship between the triangles. A sample table is below (you may need more than
4 entries).

Hand out the following worksheet for homework and ask the class if there are any
further questions.

In the triangle below, each interior triangle is constructed from the midpoints of the
triangle it is inside. You are given the following measurements. 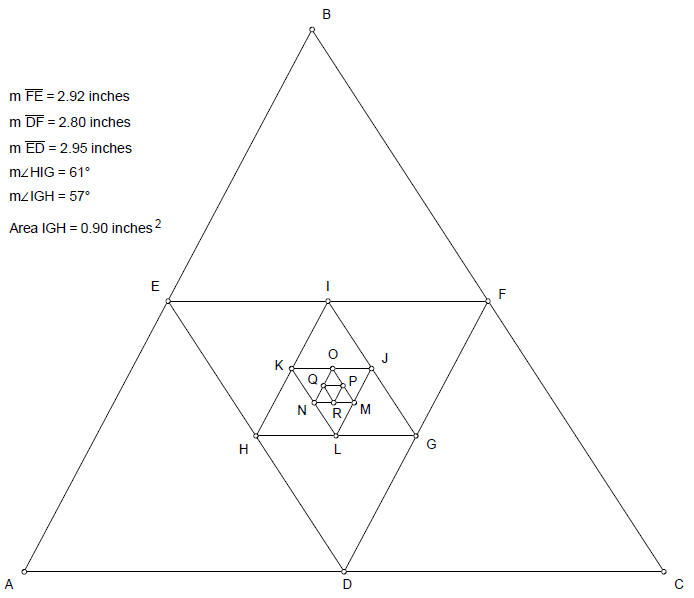