What is a linear system?

Examples of systems arising in applications

A general category of numerical problem is systems of equations in
which we have m statements about n variables x1, . . . , xn:

The fs are known functions, the ys are given quantities, and the xs
are the unknown variables to be determined.

Linear functions
A function f is linear if

where the functions fi that define it are linear. This means a system
of m linear equations in n variables looks like this:

(I have switched to the convention for linear systems that the un-
knowns go on the right.)

A linear system can be written as one equation using matrix notation.
A small example:

For those who enjoy dots:

A system of m equations in n unknowns is an equality with an
m-vector on one side and the product of an m × n matrix with an
n-vector on the other side.

Suppose we have a coordinate system transformation:

Here is a simple circuit: 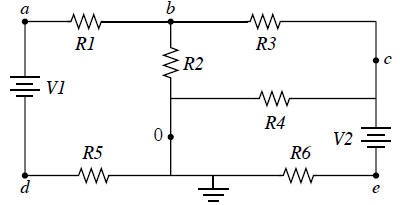 What are the voltages across all the components? A straightforward
analysis but tedious on paper.

Result is a system with 7 variables and 7 equations

In, for example, a furnace, surfaces exchange heat by thermal
radiation.

• Each surface emits radiation equally in all directions at some rate

• Each surface reflects a fraction

of the incident radiation

• The emitted radiation from one surface falls on the other
surfaces
◦ How it gets distributed depends on geometry
◦ The fraction of light leaving patch i that ends up at patch j is the
form factor fij .

A radiation balance at each surface results in a linear equation:

where Bi is the total radiation leaving the surface, known as its
radiosity (hence the name of the method).