are called the standard basis vectors. They are an example of what is called a
“basis”. Here is the definition in the case of space vectors:

Note that the dot-product of two vectors is a number!

The dot product of two plane vectors is (predictably) defined by

An important property of the dot product is its relation with the length of a vector:

43.1. Algebraic properties of the dot product

which hold for all vectors

and any real number t.

43.2. The diagonals of a parallelogram

43.3. The dot product and the angle between two vectors

Here is the most important interpretation of the dot product:

Theorem 43.4. If the angle between two vectors

is θ, then one has

Proof. We need the law of cosines from high-school trigonometry. Recall that for a triangle OAB with
angle θ at the point O, and with sides OA and OB of lengths a and b, the length c of the opposing side
AB is given by

In trigonometry this is proved by dropping a perpendicular line from B onto the side OA. The triangle 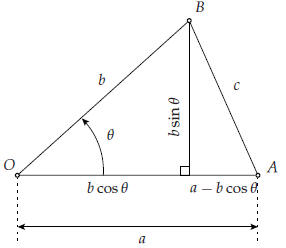 Figure 20. Proof of the law of cosines

OAB gets divided into two right triangles, one of which has AB as hypotenuse. Pythagoras then
implies

After simplification you get (60).

To prove the theorem you let O be the origin, and then observe that the length of the side AB is the
length of the vector

Compare this with (60), keeping in mind that

: you are led to conclude that

43.4. Orthogonal projection of one vector onto another

be a given vector. Then for any other
vector

there is a number λ such that

. In other words, you can write any vector

as the sum of one vector parallel to

and another vector orthogonal to

are called the parallel and orthogonal
components of the vector

), and sometimes the following notation is used

There are moderately simple formulas for

), but it is better to remember the following derivation
of these formulas.

Assume that the vectors

and vx are given. Then we look for a number λ such that

if and only if

Expand the dot product and you get this equation for λ

To compute the parallel and orthogonal components of

you first compute λ according to (61),
which tells you that the parallel coponent is given by

The orthogonal component is then “the rest,” i.e. by definition

In § 41 we saw how to generate points on a line given two points on that line by means of a
“parametrization.” I.e. given points A and B on the line

the point whose position vector is

for any value of the “parameter” t

• Clearly, X will be on the line if and only if AX is parallel to

, the segment AX and the line

will be parallel if and only if

holds if and only if

if and only if the following vector equation is satisfied:

This equation is called a defining equation for the line

Any given line has many defining equations. Just by changing the length of the normal you get a
different equation, which still describes the same line.