§ 5.1
Introduction to Polynomials and Polynomial
Functions

Polynomials
A polynomial is a single term or the sum of two or more
terms containing variables with whole number exponents.

This polynomial contains four terms. It is customary to write the terms in
order of descending powers of the variable. This is the standard form of a
polynomial.

3 is the leading coefficient. The degree is 4.

is an example of a polynomial function. In a polynomial
function, the expression that defines the function is a
polynomial.

How do you evaluate a polynomial function? Use
substitution just as you did to evaluate functions in Chapter 2.

models the cumulative number of deaths from AIDS in the
United States, f (x), x years after 1990. Use this function to
solve the following problem.

SOLUTION
To find f (8), we replace each occurrence of x in the function’s
formula with 8.

Polynomial functions of degree 2 or higher have graphs
that are smooth and continuous.

By smooth, we mean that the graph contains only
rounded corners with no sharp corners.

By continuous, we mean that the graph has no breaks
and can be drawn without lifting the pencil from the
rectangular coordinate system. 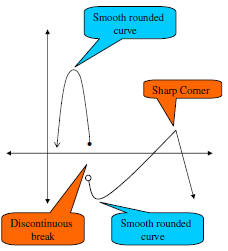 EXAMPLE
The common cold is caused by a rhinovirus. After x days of
invasion by the viral particles, the number of particles in our
bodies, f (x), in billions, can be modeled by the polynomial
function

Use the Leading Coefficient Test to determine the graph’s end
behavior to the right. What does this mean about the number
of viral particles in our bodies over time?

SOLUTION
Since the polynomial function has even degree and has a
negative leading coefficient, the graph falls to the right (and
the left). This means that the viral particles eventually
decrease as the days increase.