1. Suppose we are given real numbers w, x, y, and z such that x < y and w < z.
Determine if each of the following inequalities is true or false or inconclusive (i.e., it
could be either true or false).

(a) Let us look at some examples: If we take numbers greater than 0 then the
inequality seems to hold. For example,

However, if we take numbers less than 0, then the inequality does not hold. For
example take

So this inequality one may or may not be true, depending on the real numbers
chosen.

(d) Summary. How do we decide to prove or disprove the inequality? In general,
remember that multiplication by negative numbers reverses an inequality, so
whenever products are involved, we suspect failure.
When only additions or multiplications by known positives are involved, we expect
the inequality to be true, provided the algebraic manipulations can show its
truth.
In general, proving the inequality true involves general calculations, whereas
proving it to be false or inconclusive is done by a simple example!
Even though our examples are fairly simple, in real life, inequalities can be lot
more complicated than equations.

Thus we even know the highest degree term!

3. Let us define s to be the monomial

• To begin, it is good to simplify s to the expression

• Now simply note that for s =

As a monomial
in x its coefficient is

and the degree is simply 6.

• Finally, let us regard s as a monomial in y and rewrite it as

So, as a
monomial in y, the coefficient is

and the degree is 4.

Find the coefficient of x
in

One approach would be to find

A simpler approach is to recognize that since we are adding polynomials, the only
terms that contribute to the coefficient of x in

So the term with x in

The desired coefficient is then 6.
A better strategy would be to do a more general problem and avoid numerical errors.
Consider the more advanced problem:
Find the coefficient of x in af + bg where a, b are constants. Clearly the x-term in
af + bg will be

so the answer is

We can, of course add the two polynomials, collect the coefficients and then find the
degree.
But that might be more work than needed.
Recall the facts:

Hence the desired degree of f + g is exactly 7.

6. Use Cramer’s rule to find the solution to a system of two equations in two variables:

Recommendation:
It is an excellent idea to double check your answer. Plug the answers in each of the
equations and verify that they are true:

Plugging this into Eq1 gives 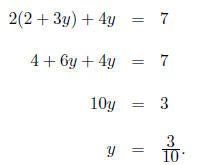 Now we use this value for y in Solution 1,

So the final solution is

As before, we recommend that you double check the answers. Either use Cramer’s
Rule or substitute the answer and verify each equation.

To write the equation of any line, it is enough to know a point on it and its slope.

Let A(2, 7) and B(4, 5) be points in the plane. Find an equation of the line passing
through A and B and put it in slope-intercept form.

10. Given the points P(2, 3) and Q(5,−1) find the equation of the line passing through
these points in both standard and parametric form.

(a) To find the standard form we find the slope, m, and use the point-slope form of
a line. Recall that

and the point slope form is

First, plug in the parametric values for x and y from the second line into the equation
of the first to determine the t value at the point of intersection.

Now find the x and y values for

We wish to eliminate t from the parametric equations

If we multiply the first equation by 2, the second by 1 and add them together we get: