The MMPT is a test used at MU to:

The MMPT is a 60-minute timed test, which consists of 40 multiple-choice questions, all
equally weighted. The maximum possible score is 40.

Be able to factor polynomials over the integers:

1. By factoring the GCF
2. By regrouping of the terms
3. By applying the basic identities:

Be able to solve:

Be able to solve:

• find the domain and the range of a given relation or function
• tell whether a function is even, odd or neither
• perform operations with functions (addition, subtraction, multiplication, division & composition
of functions) stating the domain of definition of the resulting function
• find the inverse of a given function
• Apply rigid & /or non-rigid transformations on the basic functions

to graph related functions, or given the graph of functions obtained
through transformations of those basic functions, determine their equation.

Given the coordinates of two points A & B , be able to:

• determine the coordinates of the midpoint M of the segment

• determine the distance from A to B

• determine the inverse trig value of certain numbers such as:

• Use the sum, difference, half-angle and double-angle formulas to determine the trig ratios of other
angles.

• solve a right triangle given some of the sides or angles.
• apply the law of sines and the law of cosines to solve oblique triangles. 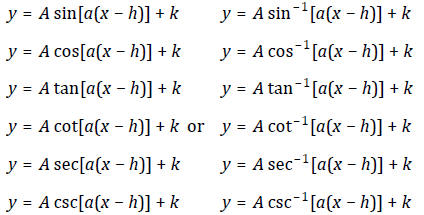