It can be shown that the scalar product as defined above, is equal to the product of the
magnitudes of the two vectors and the direction cosine between them:

• Vector product. The vector product between two vectors A and B is a third vector C,
defined as 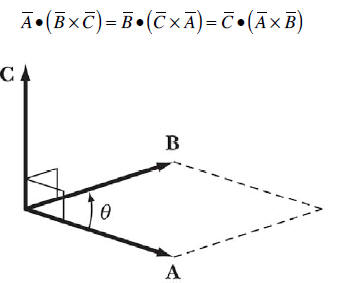 Figure 3. Properties of the vector product between the vectors A and B.

The situation is more complicated if we are using spherical or cylindrical coordinates.
Consider for example the motion of an object shown in Figure 4.

Figure 4. Motion of an object described in terms of spherical coordinates.

When the object moves during a time dt from P(1) to P(2), the spherical unit vectors
change too, as shown in Figure 4:

Based on the definition of the unit vectors in the spherical coordinate systems we can
conclude:

By dividing each side by dt we obtain the following relations:

Using these relations we can calculate the velocity and acceleration:

Other relations for spherical and cylindrical coordinates can be found in the textbook.

The coordinates in the two different coordinate systems are connected to each other via a
rotation matrix:

When we differentiate the scalar function we find the following relation:

Other important operators are defined in terms of the gradient operator: 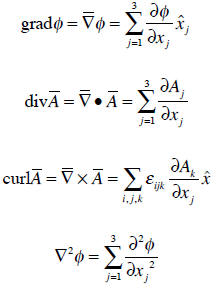 Various theorems relate volume, surface, line integrals of vectors. Some of the most
important theorems are:

Stoke’s theorem is most useful if it reducing a two-dimensional surface integral to a one-dimensional
line integral.